The purpose of this article is to give an overview of how the DMX protocol works and to describe a common interface.  Visit our Projects page for examples of several animatronic and lighting projects.  Though we have taken steps to assure the quality of information here, Brookshire Software makes no guarantees about the information presented here.  Brookshire Software cannot be held liable or accountable for any use or misuse of the provided information.

The DMX512 protocol has been employed since 1986 to control a variety of devices.  Its original use was for stage lighting and light dimmer controls, but a variety of different devices have emerged.  Relay devices, motor controllers, X-Y platforms, scanners, MP3 players, and a variety of other custom hardware is available on the market.  The following list is a small sampling of some popular DMX512 manufacturers.

The DMX512 protocol uses the XLR style connectors (see below) to transmit RS-485 data.  When running DMX512 cabling, be sure to use twisted pair wire (the differential RS-485 standard performs best with twisted pair).  Also, the final unused XLR connector in a DMX512 daisy chain network should be terminated with a 120 ohm resistor (to prevent ringing and device malfunction). 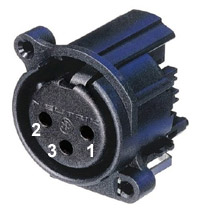 The packet begins with a break condition that must last 88us.  The break is followed by a mark condition that must last at least 8us.  The break and mark combine to inform all DMX512 devices that a new DMX512 packet is about to be transmitted.  A "start code" follows the break and mark.  The interpretation of the start code is vendor dependent, but is expected to be zero in general.

After the synchronization signaling, the actual device data payload is transmitted.  As many as 512 bytes may follow; in general each device on the DMX512 network uses a single byte of information to determine, for example, how must to dim a lighting fixture.  Most DMX512 devices have a programmable "start address."  This start address determines which portion of the payload the unit will interpret.  For example, the Chauvet DMX-4 dimmer has four channels.  If the start address is set to seven, the device will read the seventh, eight, ninth, and tenth payload bytes and program the dimmer channels accordingly.

VSA is a copyright of Brookshire Software, LLC. All other products mentioned are registered trademarks or trademarks of their respective companies.

Questions or problems regarding this web site should be directed to webber@BrookshireSoftware.com.
Copyright © Brookshire Software, LLC. All rights reserved.